Return of the Buffalo is the name given to the work of fostering family wellbeing at Sandy-Saulteaux Spiritual Centre. It means returning to the land, returning to Indigenous lifeways and returning to the teaching of respect for ALL our relations.

Listen to our podcast to hear stories from the Return of the Buffalo community and wisdom from the knowledge-keepers who inspire us.

Want to be the first to hear when we release a new episode? Sign up for our newsletter and check off “Return of the Buffalo podcast”. 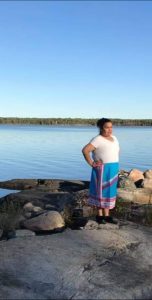 Marina Coates is one of the moms who joined the Return of the Buffalo community in the summer of 2018. Her infectious delight in her young son was immediately noticeable, as was the way she and her whole family came home to their best selves when they were on the land together at Sandy-Saulteaux. Marina reminds us how the sweat ceremony and time on the land are simple and central practices for Indigenous wellness and healing. Her story also reflects a reality that is known to many who are recovering their sobriety: Often when the sobriety journey is undertaken by two partners, it can be hard for the pair to keep pace with each other. When do you wait for a partner to catch up, and when do you know that it is time to move ahead on your own? Marina shares some hard-won wisdom that will speak to many.

Rachael White-Simard says she was always a curious girl growing up, asking a lot of questions, looking in a lot of corners where her mother didn’t always want her to look. Although her last name was literally “White,” there were parts of her family tree that weren’t white at all. With her blue eyes and fair complexion, Rachael easily passes as white, but as the years passed she kept digging for her roots, and found out more about her hidden Indigenous ancestry and came to this part of her identity. When she was a helper in the Return of the Buffalo retreats, she received a spirit name that echoed her journey of emergence: Turtle Woman Coming Out.

In this interview, Rachael shares some memories from the Return of the Buffalo retreats and talks about a life as a helper who continually is moving in the tensions between different worlds and worldviews. 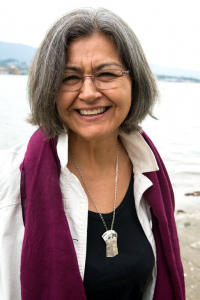 Patricia June Vickers was “born into complexity—the heritage of a missionary mother who went to teach in the village of Gitxaala where she married an Indigenous fisherman.” Patricia says of her family inheritance that it was “not only a playing-out of oppression, but also an invitation to creative possibility.”

Patricia has paid attention to healing possibilities wherever she has found them, from the Eucharist to the Sweatlodge to Neurofeedback therapy. All of these have come together in Patricia’s recovery from her own trauma of childhood sexual abuse, and in her accompaniment of others on their healing journeys.

When she was Keeper of the Learning Circle in 2014, Patricia planted the seed of Indigenous family healing work at Sandy-Saulteaux Spiritual Centre that has grown into the Return of the Buffalo Indigenous Family Well-Being Initiative. She has gone on to become an internationally respected leader in the field of trauma research and programming, specifically for Indigenous peoples. Her interdisciplinary doctorate included research into Ts’msyen language (Sm’algyax), and  the transformative aspects of ancestral law.

In this episode, Patricia talks about her history with the Sandy-Saulteaux Spiritual Centre, and her vision for what is possible for Return of the Buffalo, based on her own experiences with traditional ceremony and cutting edge clinical trauma treatment methods. 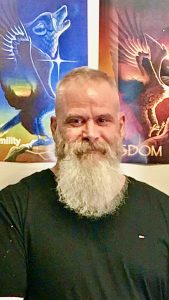 It is said that the Inuit have forty words for snow. Mitch Bourbonniere would like to have forty words for love to explain the kinship approach to healing work that he inherited from his Metis parents and has continued to expand under the guidance of Indigenous elders like Luc Arquette and Margaret Lavalee. Mitch calls his work with vulnerable youth and young adults “Action Therapy.” His philosophy of “lateral empathy” gets people helping themselves by helping others. Circumventing the credentialism that keeps many gifted helpers out of roles in community healing work, Mitch has offered mentorship, inspiration and opportunity for a network of Action Therapists who have become a go-to resource for First Nations Child and Family Service agencies in Manitoba, as “uncles and aunties” for youth in care, and more recently, as supports to Indigenous families in preventing apprehensions in the first place.

Stan McKay (Walking Buffalo) is a founding elder of the Sandy-Saulteaux Spiritual Centre. His stories and his vision are cherished by our community, and inform much of our work. In this wide-ranging conversation, Stan shares about his happy early childhood in the self-sustaining village of Fisher River, about some traumatic memories of residential school, and about his healing journey back to the lodge of his own people. He highlights the healing power of reconnection with the Earth and challenges us to “forget the imposition of fake wealth and security, and to find community and family and our real sense of being a person on the land.” 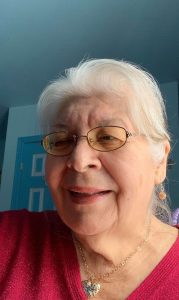 Joyce Johnston is one of those grandmothers you just want to sit and visit with for hours. She couldn’t share a cup of tea through our less-than-perfect internet connection, but she shared laughs and teachings, stories and affirmations. Whether sharing her experience as a grandmother of a child in care of the Ontario Children’s Aid Society, as a United Church pastor collaborating with a son who is a traditional spiritual leader, her critique and appreciation of early Christian influences, her wry observations of her own colonization and decolonization, or her experiences as a helper in a Return of the Buffalo Mother’s Retreat, Joyce brings a lively wit and a big love to all the relationships she reflects on.

Diandra Rose Powderhorn is a writer whose motto is, “Inhale misery, exhale poetry.” She is a survivor of horrific intergenerational trauma, an addict in recovery and an awesome mom. The story of her people, the Sayisi Dene, is one of the worst stories of Indigenous displacement and dispossession in Canada’s history, a trauma that Diandra and others in her family learned to dowse with addictions. In her case, it led to the apprehension of both of her children, a devastating trauma that only pulled her further into the spiral of addiction for a time.

Diandra was one of the first participants in the Indigenous Family Reunification Pilot Project, the predecessor of the Return of the Buffalo Indigenous Family Wellness Initiative. Already an active participant in Dialectical Behavioural Therapy (DBT), at Sandy-Saulteaux Spiritual Centre, Diandra connected for the first time with the healing power of Spirit. Through grit and fierce determination, she has since managed to overturn a permanent apprehension order and today has full custody of her two beautiful, fun-loving children.

We were moved by Diandra’s agreeing to share her story with us as an inspiration to other families caught up in the child welfare system, and as a first-hand account of that system’s colonial shadow.

In this episode, we hear the story of co-host Henry McKay. Henry knows first-hand the structures of poverty and trauma, colonization and criminalization that trap many Indigenous people in the cycles of addiction and lateral violence. But under the mentorship of leaders like Luke Arquette and Mitch Bourbonierre, Henry became a cycle-breaker. Henry came on as one of the helpers in the Return of the Buffalo retreats at Sandy-Saulteaux Spiritual Centre, where his leadership gifts were quickly recognized. With 21 years of experience in ceremony, a research award and his Bachelor of Social Work-Indigenous Knowledge near completion, this “young elder” brings a lot of wisdom, compassion and humility to his role as co-host of the RotB podcast, as well as a fabulous Berens River baritone voice.

Adrian Jacobs is the Keeper of the Circle at Sandy-Saulteaux Spiritual Centre. In this first episode of the Return of the Buffalo Podcast, he talks about growing up as the son of an Anglican Christian mother and a Haudenosaunee Longhouse Faith Keeper, about the origins of the Return of the Buffalo Indigenous Family Wellbeing Initiative, and the Indigenous genius of a non-dualistic worldview.

Want to be the first to hear when we release a new episode? Sign up for our newsletter below and check off “Return of the Buffalo podcast”.