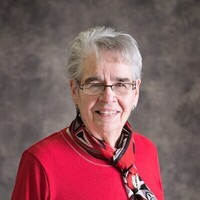 Alice Ruth McFarlane, of Moosomin, Saskatchewan, beloved wife of the late John McFarlane passed away at Southeast Integrated Care Centre, Moosomin, on April 18th at the age of 84 years. She was the mother of Holly, Bruce and Steven, the much-loved grandmother of ten grandchildren and great grandma of five great grandchildren.

Alice was born in North Chili, New York to Helen and Nelson Morton and met her life partner in a church school in New York State. Their first ministry was in Pikangikum where John taught school while leading worship on weekends. When John became a candidate for ministry in the United Church they moved to Winnipeg. After ordination they served in the communities of Pikangikum, South Indian Lake, Rainy River and Carry the Kettle, and others. Wherever they served, Alice made good friends among the Indigenous communities even with responsibilities for the family while John was away on church business. Alice was always ready to make coffee and cakes for weddings, teach Sunday school and help with music. Wherever they moved her life was filled with gardening, cooking, reading, singing and travelling. During their time at Carry the Kettle Alice became close friends with the Saulteaux family.

A quote from her obituary tells of a full life reaching out for newer, richer, deeper, life-changing experiences. Her life was rich with personal growth, always pushing the boundaries mentally, spiritually and intellectually for the betterment of herself, her family and the world. Their last project was with the All Native Circle Conference and Dr. Jessie Saulteaux Resource Centre where Alice’s contributions were acknowledged, as she became an honourary elder of the Dr. Jessie Saulteaux Centre. Two cedar trees and a decorative apple tree remain at the Centre where her gardening skills in the flower beds were not dissuaded, even by serious problems with poison ivy. Alice continued to visit the Centre whenever possible to be a part of graduations and ceremonies.

Much of Alice’s life was centered in her family, her daughter, Holly, two sons, Bruce and Steven, her ten grandchildren and five great grandchildren, taking every opportunity to visit them in their homes whether it be Ontario, British Columbia or Saskatchewan. and never missing significant dates with a card or acknowledgment.

Alice’s friendship, generosity and kindness will be remembered in the communities where she lived and served.

Memorial tributes may be made to the Bethel United Church or the Moosomin and District Health Care Foundation – Palliative Care in memory of Alice.