The Board of the Sandy-Saulteaux Spiritual Centre is pleased to announce the appointment of Adrian Jacobs as the Keeper of the Circle, the principal of this newly amalgamated school. 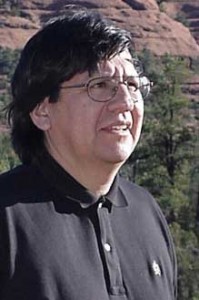 Adrian Jacobs, Keeper of the Circle

Adrian Jacobs is Cayuga First Nation of the Six Nations Reserve in Ontario. There he founded and maintained an Indigenous church that is self-governing, self- supporting, and thriving in his home community. Currently, Adrian Jacobs is working at the University of Alberta to promote Aboriginal Health. In August 2011, Adrian was the guest speaker at the Aboriginal Spiritual Gathering of the United Church of Canada, where he was very well received by participants.
Adrian Jacobs possesses over thirty years experience in networking and training of ministry candidates and Aboriginal leaders for organizations in Canada and the United States.

Adrian has in-community experience, and knowledge and understanding of his own culture and other Aboriginal communities’ cultures in Canada and internationally. He has spoken on numerous occasions within First Nations, Inuit and Métis contexts and is a published writer on the intersection of teachings and spirituality of Aboriginal culture with Christian faith. Adrian understands and speaks deeply to issues about the root causes of colonization and the impact of historical trauma on Aboriginal peoples and their communities.

Adrian Jacobs has strong leadership qualities that are in keeping with Indigenous cultural ways. In addition to being an excellent communicator he has considerable administrative and personnel experience. His history in theological education and curriculum development will be important in guiding this new nationally-based school into the future. Mr. Jacobs will also bring insight and vision to the wider church.

Adrian is a single father of five children and grandfather of one. He is passionate about graphic art, poetry, writing and speaking, and mentoring.
The Sandy-Saulteaux Spiritual Centre Board welcomes Adrian Jacobs and looks forward to his arrival at the school this summer in August.

Grafton Antone and Fjola Hart Wasekeesikaw
Co-chairs, Board of Directors